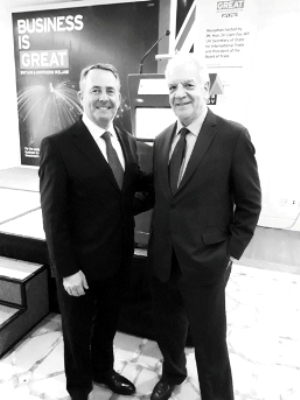 On Friday, last week, I attended a meeting between Dr Liam Fox the UK Secretary of State for International Trade and the Chairman of Ho Chi Minh City People’s Committee Mr. Nguyen Thanh Phong. The Secretary of State was also accompanied by HMA Giles Lever and The Consul General Ian Gibbons.

Much of the discussion was about Smart City Development, a topic that has been appearing in the press, in recent times. In particular Dr. Fox raised questions as to how this will work in Vietnam trying to integrate a newly planned structure into the existing infrastructure, how these expensive projects will be funded, and what are the City’s priorities.

The Chairman responded by saying that plans have changed as the population growth has far exceeded the pace of infrastructure development and that the current population of HCMC is 13 million. The key priorities for Smart City Development are Transportation, Health Care, Education, Security and E Government.

The city has a plan for a Smart City Transportation Model, which in time will help solve traffic and congestion problems. Initially it will be applied in new urban areas for example in Thu Thiem. Through Smart City E Government the authorities will be better able to serve the people and the interaction between business and Citizens with the Government will be smoother and a Smart City model will create better living conditions for the population.

Funding will come from three main sources – State and City budget, application of PPP models and Private Sector. The choice of funding model will depend on the project but PPP will not be the model for all projects.

Of note a delegation from Ho Chi Minh City visited the UK late last year to discuss with several UK bodies and companies about Smart City Development and the feeling is that there is a real ambition here but the key challenge will be planning and finance.