Vietnam has gained remarkable achievements in economic development in 2020, although this was a turbulent year for the entire world.

As a long-time resident of Vietnam and a dual national, I can only applaud the Government for its swift proactive measures to contain the pandemic and enable a relatively strong economic performance in 2020. The achievement of 2.91% GDP growth and also very few COVID-related deaths is more remarkable, when you compare this to the developed economies of North America and Europe and then take into account the size of Vietnam’s population, the long often porous border with China, and Vietnam’s limited medical resources and facilities. We must also remember that the severely impacted tourism and hospitality sector, which was major contributor to GDP, knocked at least 1% off GDP in 2020.

Our GDP growth was the highest in Southeast Asia and one of the highest in the world. This was in large measure due to the strong export performance and continued significant foreign direct investment (FDI).

Exports reached US$ 281 billion, an on-year increase of 6.4%, and registered FDI recorded US$ 28.53 billion, and whilst this was 25% down on 2019, it was still a great achievement bearing in mind the borders were effectively closed for most of the year. Another contributor to GDP growth was the increased public investment by the Government, as they sought ways to inject a stimulus package into the economy. 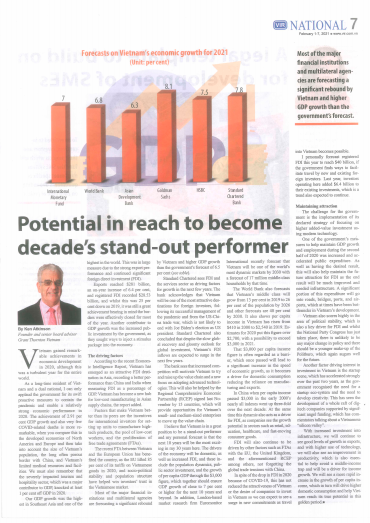 According to a recent Economic Intelligence Report, Vietnam has emerged as an attractive FDI destination in Asia, recording a better performance than China and India when measuring FDI as a percentage of GDP. Vietnam has become a new hub for low-cost manufacturing in Asian supply chains, the report added.

Factors that make Vietnam better than its peers are the incentives for international investors for setting up units to manufacture high-tech products, the pool of low-cost workers, and the proliferation of free trade agreements (FTAs).

The recent FTA between Vietnam and the European Union has benefited the country, as the EU lifted 85% of its tariffs on Vietnamese goods in 2020, and socio-political stability and population structure have helped win investors’ trust in the Vietnamese market.

Most of the major financial institutions and multilateral agencies are forecasting a significant rebound by Vietnam and higher GDP growth than the Government’s forecast of 6.5% (see table).

Standard Chartered sees FDI and the services sector as driving factors for growth in the next few years. The bank acknowledges that Vietnam will be one of the most attractive destinations for foreign investors, following its successful management of the pandemic and from the US -China trade war, which is not likely to end with Joe Biden’s election as US President. Standard Chartered also concluded that despite the slow global recovery and gloomy outlook for global investment, Vietnam’s FDI inflows are expected to surge in the next few years.

The bank sees that increased competition will motivate Vietnam to try and raise up the value chain and a new focus on adopting advanced technologies. This will also be helped by the Regional Comprehensive Economic Partnership (RCEP) signed last November by 15 countries, which will provide opportunities for Vietnam’s small- and medium-sized enterprises to move up the value chain.

I believe that Vietnam is in a great position to be a stand-out performer and my personal forecast is that the next 10 years will be the most exciting in my 30 years here. The drivers of the economy will be domestic, as well as increased FDI, and these include the population dynamics, public sector investment, and the growth of per capita GDP through the US$ 3000 figure, which together should ensure GDP growth of close to 7% or higher for the next 10 years and beyond. In addition, London-based market research firm Euromonitor International recently forecast that Vietnam will be one of the world’s most dynamic markets by 2030 with a forecast of 17 million middle-class households by that time.

That US$ 3000 per capita income is often regarded as barrier, which once passed will lead to a significant increase in the speed of economic growth, as it becomes a driver for domestic consumption reducing the reliance on manufacturing and exports.

In China when per capita income passed US$ 3000 in the early 2000’s nearly all indexes went up three fold over the next decade.  At the same time this dynamic also acts as driver for FDI, as companies see the growth potential in sectors such as retail, education, healthcare and fast moving consumer goods.

FDI will also continue to be driven by other factors such as FTAs with the EU, the United Kingdom, and the aforementioned RCEP among others, not forgetting the trade tensions with China.

In spite of the drop in FDI in 2020 because of Covid-19, this has not reduced the attractiveness of Vietnam or the desire of companies to invest in Vietnam so we can expect to see a surge in new commitments as travel into Vietnam becomes possible.

I personally forecast registered FDI this year to reach US$ 40 billion, if the Government finds ways to facilitate travel by new and existing foreign investors. Last year, investors operating here added US$ 6.4 billion to their existing investments, which is a trend also expected to continue.

The challenge for the Government is the implementation of its declared strategy of focusing on higher added-value investment using modern technology.

One of the Government’s measures to help maintain GDP growth and employment during the second half of 2020 was increased and accelerated public expenditure. As well as having the desired result, this will also help maintain the future attraction for FDI as the end result will be much improved and needed infrastructure. A significant portion of this expenditure will go into roads, bridges, ports, and airports, which at times have been bottlenecks in Vietnam’s development.

Vietnam also scores highly in the area of political stability, which is also a key driver for FDI and whilst the National Party Congress has just taken place, there is unlikely to be any major change in policy and there should be a younger make-up of the Politburo, which again augers well for the future.

Another factor driving interest in investment in Vietnam is the start-up scene, which has accelerated strongly over the past 2 years, as the Government recognized the need for a startup eco-system, and the need to develop creativity. This has seen the development of a whole raft of digitech companies supported by significant angel funding, which has commentators talking about a Vietnam “silicon valley”.

With increased investment into infrastructure, we will continue to see good levels of growth in exports, and with higher use of technology, we will also see an improvement in productivity, which is also essential to help avoid the “middle income trap” and will be a driver for income growth. We will see a more rapid increase in the growth of per capita income, which in turn will drive higher domestic consumption and help Vietnam reach its true potential in this golden period.

View more
Also appears under...
Sign in with LinkedIn Close