Businesses across Europe have greater concern about the prospect of the UK leaving the EU than Greece leaving the eurozone, according to new research from Grant Thornton. This comes just as the UK is about to go the polls in an election where a potential EU referendum is a major policy battleground, and just ahead of Greece’s deadline to repay almost €1billion to the International Monetary Fund in May. This continued uncertainty over both countries’ positions could have a destabilising effect on the European economy, just as it begins to show signs of turning a corner.

Grant Thornton’s research, compiled for its upcoming Future of Europe report, found that nearly two thirds of businesses (64%) in the eurozone believe a British exit from the EU would have a negative impact on Europe. This compares to 45% of businesses who believe a Greek exit from the eurozone would be negative. The difference is even more pronounced among non-euro EU members, at 72% and 46% respectively. 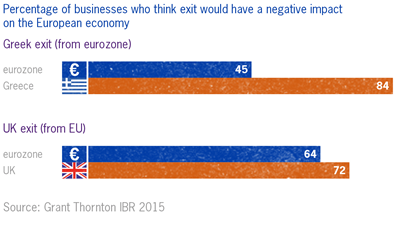 The research also shows that levels of concern are considerably higher in the UK and Greece themselves. In the UK, 72% of firms think a British exit would have a negative impact on the EU, while 84% of Greek businesses believe a Grexit would be negative.

Sacha Romanovitch, CEO Elect at Grant Thornton UK LLP, commented: “Relations between Brussels and London may not always be comfortable, but there’s absolutely no doubt that Europe’s business community values the UK’s membership extremely highly. The General Election in Britain could mark a real crossroads though, as depending on the outcome, it could be seeing an in/out referendum on Europe in its next term. From our conversations with dynamic mid-sized businesses throughout the UK, we know the uncertainty created by a potential referendum is a real and worrying concern. With opinion polls suggesting a vote to leave is a distinct possibility, and given London’s status as Europe’s financial centre, it’s easy to understand why European businesses are worried.

“On the other hand, this aversion to a Brexit arguably gives the next British government a strong hand when it comes to seeking reform in Europe – and may test President Juncker’s reported refusal to consider any major EU treaty changes. One thing’s for sure; businesses and policymakers across the continent will be watching very closely to see how the dust settles on 8 May.”

Sacha Romanovitch added: “Business fears over the impact of a Grexit may have been overtaken by fears of a Brexit, but it would be dangerous to bury heads in the sand and ignore the possibility that either, or both, scenarios could still happen.  New figures show that Greece’s budget surplus has shrunk dramatically since the new anti-austerity government took power, while its budget deficit grew even larger in 2014.

“Put simply, neither eventuality should be underestimated. With the UK election set to be the most unpredictable in years, and while Greek negotiations with their eurozone counterparts continue, we could be facing a damaging period of uncertainty. The European economy appears to have turned a corner after years in the economic doldrums, so we must hope that policymakers in London, Athens, Brussels and other capitals are focused on maintaining a stable environment for businesses across Europe.”