By:
Trinh Kim Dung
Since 2020, Vietnam has witnessed a significant increase in both numbers of completed transactions and transaction value, totaling over $12.7 billion with over 1,140 deals, according to Capital IQ data and Grant Thornton Vietnam’s analysis.

Notably, despite the limitations of the pandemic, Vietnam’s investment market hit a record year in 2021, both in terms of transaction value and volume, as evidenced by 41 per cent on-year growth in deal volume and 37 per cent increase in deal value from 2020. This jump was driven by sustained efforts to attract foreign investment and Vietnam’s economic stability.

However, the picture of the Vietnamese investment market in the first 10 months of 2022 failed to impress. The period recorded only 227 deals, marking a decrease of 42 per cent in deal volume and 29 per cent in transaction value compared to the corresponding period of 2021.

The Vietnamese investment activity downtrend in 2022 to that point has mirrored the current global investment market. According to Refinitiv data, global investment in the first half of the year was down 21 per cent by value and 17 per cent by volume compared to the same period the previous year, due to inflationary pressure, rising interest rates, and the Russia-Ukraine war.

The majority of investment activities since 2020 were from private companies, including both venture capital (VC) and private equity (PE), reaching $8.5 billion, equivalent to 66 per cent total value of completed deals. In terms of deal size, the most common ticket size among venture capital investors, according to our observation, is $1-3 million while PE buyers prefer larger deal sizes ranging from $5-30 million.

We also observed that the preferred exit methods in Vietnam's market are through trade-sales and secondary buyouts, while initial public offering is no longer a preferred option as it used to be several years ago. This would probably be the result of unstable capital markets, especially during the perceived uncertainty for the global economy. 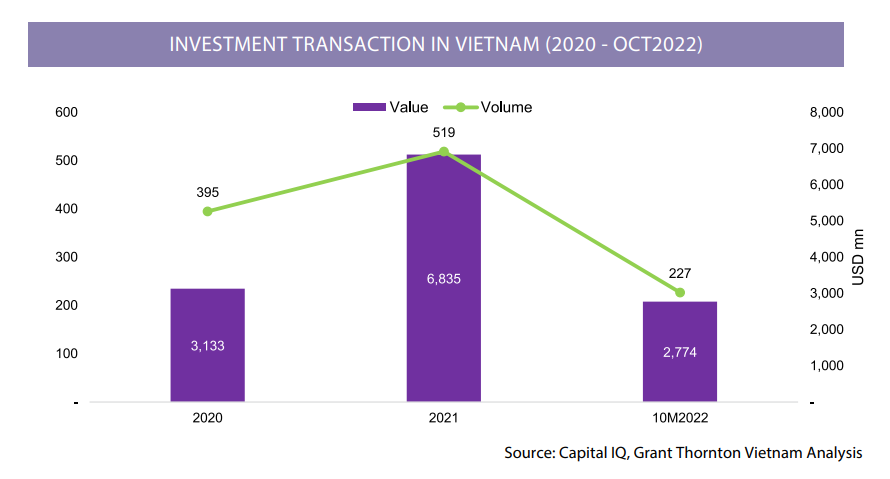 By volume, the industrial, IT, and consumer discretionary sectors were the three most targeted.

Consumer discretionary continued to receive increasing interest from investors with deal volume ranging from 23 to 36, while tech deals also maintained their uptrend momentum thanks to investment themes related to online payment, e-commerce, and blockchain. It saw 26 deals in 2020 and this increased to 42 deals in 2021 and 34 deals in the first 10 months of 2022.

In terms of value, finance, consumer discretionary, IT, and consumer staples are the top areas that attract private investment, accounting for roughly 60 per cent of total transaction value.

Notably, 2021 witnessed large deals in the financial sectors, with a focus on consumer finance businesses.

Previously, investment activities were dominant by foreign investors but this situation has changed significantly as local players are more actively involved in transactions. Since 2020, local players participated in over 500 transactions with a total value of more than $4.8 billion, accounting for 44 per cent by volume and 38 per cent by value of Vietnam’s total investment market.

In PE their participation also cannot be ignored. From our observation, local investors have started to tap into the PE market, although their activity has been moderate compared to foreign peers. Since 2020, Vietnamese-based investors were involved in 240 deals with a total deal value of over $1.9 billion, representing approximately 30 per cent and 23 per cent by volume and value respectively.

A larger-than-average transaction value of Jungle Venture was contributed by investments into KiotViet ($45 million) and Global Online Financial Solutions Ltd. ($20 million), where Jungle Venture co-invested with other funds.

Some active domestic players entering in venture capital market include Do Venture, Mekong Capital, and VinaCapital Ventures. Mekong Capital had lesser deal counts but a much larger average deal size than Do Ventures. Our observations show that Mekong Capital prefers to invest in companies that have at least one year of operations and typically invests in companies with annual revenues between $3-10 million, and annual net profit between $300,000 and $2 million in the year it makes the investment.

Despite the challenges in the global and domestic investment environment such as the soaring inflation, rising interest rates and looming recession, the outlook for investment in the Vietnamese market is expected to be still bright in the medium and long term and there are several factors for this: Firstly, Vietnam’s economy is dominated by small and medium-sized enterprises with 98 per cent of market share and contributing to 47 per cent of national GDP. However, SMEs still face difficulties in accessing finance.

Vietnam has been regarded as an attractive investment destination by foreign investors thanks to the reform of legal framework to allow wider access to them. Moreover, the lifting of foreign ownership limits, the clearer and more favorable policy on capital gains and corporate income tax, also help to make Vietnam a more attractive investment destination.

Thirdly, equitisation of stateowned enterprises, after slow pace in prior years, is expected to gain momentum and will offer a large pool of investment opportunities for both foreign and local investors in the coming years.

A strong technology talent pool coupled with a growing entrepreneurial mindset also play an important role in transforming the Vietnamese tech industry. Digital payments will continue to develop as the government is pushing digital transformation, along with the growing young population and tech-savvy consumers.