Ho Chi Minh City 7 March 2019 – The percentage of businesses globally with at least one woman in senior management has risen to 87%, an increase of 12% in the last year, according the latest Women in Business research from Grant Thornton International.

Overall, women now hold 29% of senior leadership positions globally. While this is only up 10% over the past 15 years of research, half this increase (5%) has been achieved in the last 12 months alone. In ASEAN, proportion of businesses with at least one woman in senior management was 94%, and the proportion of senior roles held by women is 28%.

While the number of women in senior leadership is increasing, gender parity at the head of the table is still a significant way off. When it comes to the role of CEO or managing director, only 15% of businesses globally have a woman leading the business.

In ASEAN, the proportion of women in senior leadership is higher than others over the world. Thirty-six percent of the senior management teams in Vietnam included women, the second highest among Asian nations, while Philippines ranked the first (37.46 percent), the report said. This was followed by Singapore (33.04 percent), Indonesia (31.85 percent), South Korea (29.89 percent), India (28.16 percent), United Arab Emirates (24.17 percent), Malaysia (22.68 percent), Thailand (19.39 percent) and Japan (15.43 percent).

Ms Nguyen Thi Vinh Ha, National Head of Advisory Services and Deputy General Director, Grant Thornton Vietnam says: “Vietnam ranked the second highest of women in leadership is not strange. In our country, women in business always play significant parts. We are proud of having many influential and inspirational female general and look forward to a generation of successors. These figures are incredibly encouraging. We expect a stronger change of women in leadership in businesses, not only in private equity.”

Mr Kenneth Atkinson, Executive Chairman of Grant Thornton Vietnam says: “If we want to continue seeing female representation trend upwards in senior positions, more deliberate action needs to be taken and leaders will play a critical role. Policies that address equal opportunity in career development, bias in recruitment and flexible working can’t just be a nice to have. To achieve meaningful progress, they must be adhered to, enforced and regularly revisited to assess their effectiveness and when that is combined with real commitment from senior leadership, you begin creating a truly inclusive culture.” 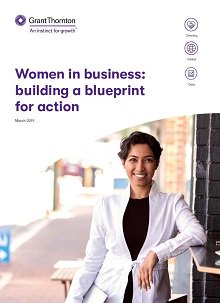