Grant Thornton Vietnam today released the results of the Vietnam Hotel Survey 2017. The report this year marks the 14 consecutive year of Grant Thornton conducting the only comprehensive research on high-end hotels and resorts in Vietnam. This year’s survey, in line with last year’s, does not include 3 star hotels because of the level of response and change in hotel mix in this category, and we focus on the upscale hotel industry, covering 4 and 5-Star hotels.

2016 is considered to have been a “fantastic year with history-making results”. The Vietnamese Tourism Industry saw an increase in both to an all-time high, with 26% increase in total foreign visitor arrivals and an18.4% increase in total revenue. In 2016, Vietnam welcomed 72 million domestic and International visitors, higher than the target of 68.5 million visitors as set out by Vietnam National Administration of Tourism (VNAT). This is a remarkable achievement considering the ecological disaster in the Central coast, which haunted the industry in mid-year 2016, and where the number of visitor dropped significantly. The Vietnam Tourism Industry recorded a record 10 million international visitors and the highest yearly increase of 2 million international visitors

To accommodate the increasing arrivals for leisure and recreation, new hotels have been completed across the country. Over 8,700 rooms from 41 new 3-5 star hotels came into operation in 2016, increasing the total number of rooms to over 420,000 rooms, much higher than the number of neighbouring countries like Malaysia, Laos, and Cambodia. 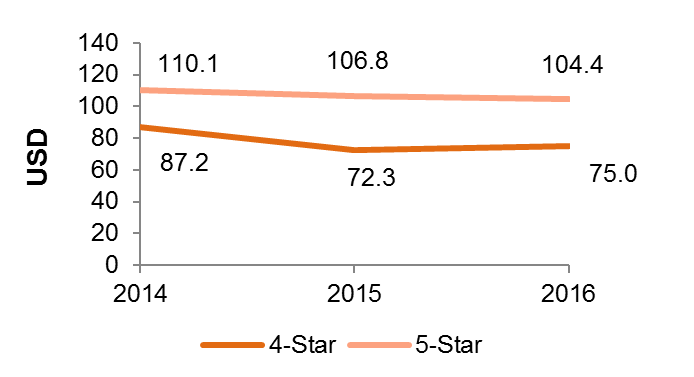 RevPAR for Hotels increased in both Star categories, with a 10% rise at 4-Star hotels and 4.1% rise in 5-Star hotels.

Year 2016 marked a year of recovery with Occupancy Rates in general increasing for both Star Rankings. However, with the expanding room inventory and a lot of projects scheduled to launch in the near future, the competition in the upscale hotel market will start to heat up, especially for 5-Star hotels. 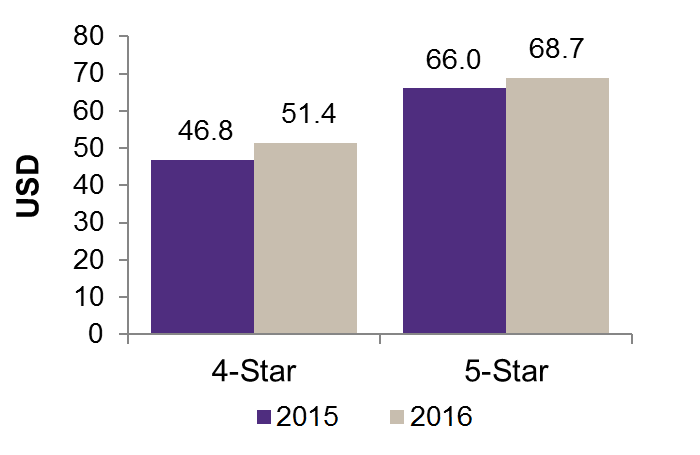 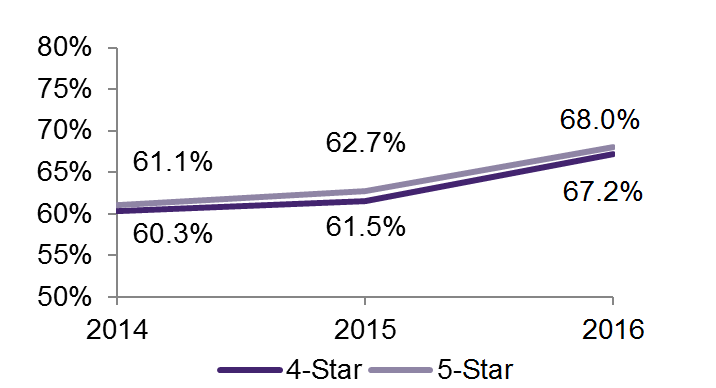 In 2016, the upscale hotel sector saw a better year with EBITDA margin increased by 1.7%. While the proportion of Fixed Charges and FF&E – Furniture, Fixtures and Equipment Reserves remained nearly the same for both years, the improvement in EBITDA was largely contributed by the positive change in both Departmental Expenses and Undistributed Operating Expenses. 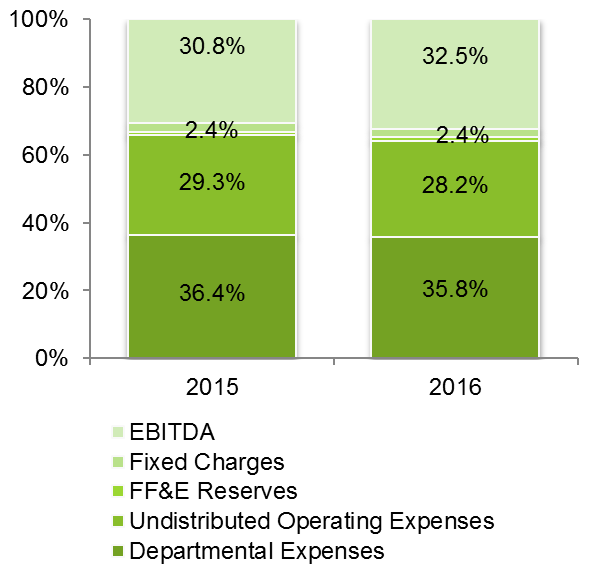 Regarding purpose of stay, Individual tourists, Tour groups and Business travellers together comprised for over three quarters (77.6%) of total guests staying in high-end hotels in 2016. Looking at 4-Star and 5-Star hotels separately, the three segments made up for 83.1% and 71.8%, respectively.

Generally, the structure of room reservations followed the same pattern as in 2015. The largest channel to reserve the accommodation at 4-Star and 5-Star properties is still Travel agents and Tour Operators with 37.3%. This ratio, however showed a gradual decline throughout the years, and decreasing further by 3.1% compared to 2015.

With regards to Star Ranking analysis, 4-Star hotels have the higher ratio of booking via Travel agents and Tour Operators at 41.3%, while the 5-Star hotels have 32.5% of its sales via this channel.

2016 saw an increase in the number of hotels who have decided that digital technology is vital to their business to help combat growing competition and to set them apart from those older hotels or those with an older mindset.

WHEN HOTELS WILL APPLY DIGITAL TECHNOLOGY INTO THEIR BUSINESS

With the 4th Industry Revolution affecting all sectors of the economy, many high-end Hoteliers have prepared fully for what is to come.  A notable increase was observed for the application of digital technology from the previous year’s 49.3% of the hotels to 67.3% in 2016. Added to that, 18.6% of the hotels decided to implement further use of technology either in this year or next year. Of those who responded that they have not made any decision, most of them are hotels from the Central and Southern Region, and the proportion of this group dropped from 23.9% in 2015 to 15.4% in 2016.

Copies of Grant Thornton Vietnam’s Hotel Survey 2017 can be ordered by visiting Grant Thornton Vietnam’s website, www.grantthornton.com.vn, or by contacting Grant Thornton on +84 8 3910 9100. An Executive Summary of the survey report is also available for download from the website. 100% of the proceeds raised from sales of the Hotel Survey 2017 will be donated to Newborns Vietnam, a United Kingdom registered charity in Vietnam, dedicated to reducing neonatal mortality in South East Asia, with a specific focus on Danang, Vietnam.