UK and US drive global U-turn

UK and US drive global U-turn

UK and US drive U-turn in global business growth prospects

New research from Grant Thornton’s International Business Report (IBR) reveals that with many emerging economies slowing, it is now the UK and US driving global business growth prospects. This ‘U-turn’ in sentiment suggests a shift in the global dynamic, with business growth opportunities set to increase in mature economies while emerging peers adjust to the prospect of slower growth than in recent years. However, Grant Thornton warns that further partisanship in the US over the budget and debt ceiling could yet derail the global economy over the next few months.

The IBR reveals UK business optimism has shot up from net 34% in Q2 this year to 76% in Q3. That is the highest figure ever recorded for the UK in 22 years of IBR research, and makes its business community the third most optimistic in the 45-economy survey. Business optimism in the US remains high too, at 52% in Q3 although marginally down from 55% in Q2. 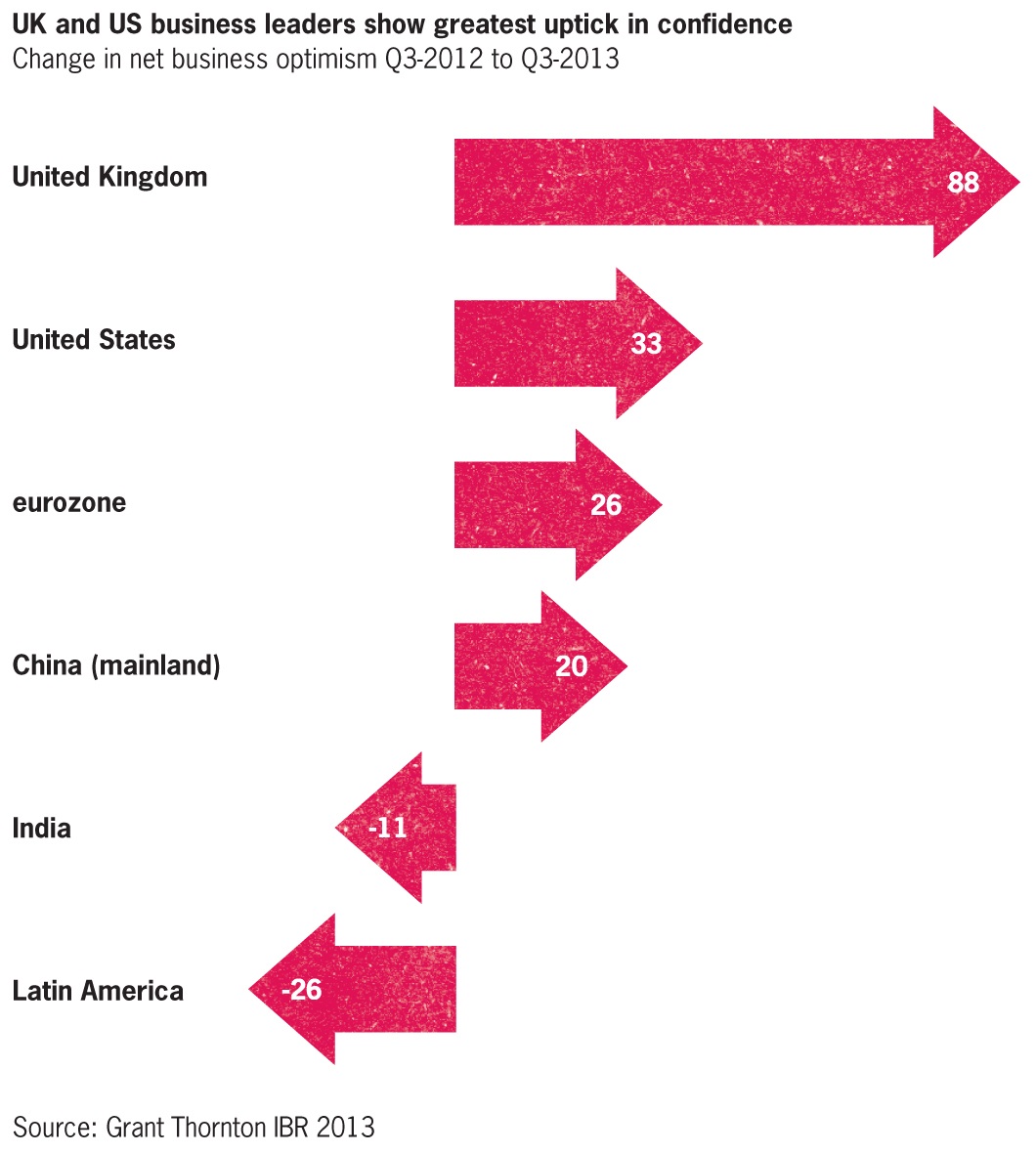 By comparison, businesses in emerging economies are markedly less confident. Brazilian optimism fell from 43% to 31% in the last quarter, a record low, while across Latin America as a whole optimism fell from 48% to 38% - its lowest since 2009. Elsewhere, Indian optimism (57%) fell to its lowest since 2003; Russia slid from 28% to 19%; Turkey (6%) dropped to its lowest since the financial crisis; and South Africa hit an all-time low of 18%. Again though China seems to be one step ahead of the other major emerging nations: having fallen to a record low of 4% in Q2, business optimism improved to 31% in Q3.

Ed Nusbaum, global CEO at Grant Thornton, commented: “The results highlight a subtle but significant shift in global economic growth patterns, with some rebalancing towards developed markets like the UK and US. Together these two economies account for a quarter of global output so any recovery should have positive repercussions around the world. Businesses around the world need to be alive to this shift in momentum, and the growth opportunities it offers.

“Clearly businesses should not write off emerging economies in their search for growth, but the results highlight the reversal of fortunes in developed countries. The BRICs and other frontier markets need to tackle issues such as rising inflation and substandard infrastructure if they are to maintain the rapid growth we’ve seen in recent years and avoid the so-called 'middle income trap'.

“The one caveat is the situation in the US. Weeks of budget and debt ceiling negotiations have only resulted in the can being kicked down the road, with the budget only agreed until mid-January and the debt ceiling until mid-February. Businesses both in the US and across the world face a nervy few months."

The IBR results are substantiated by recent growth forecasts issued by the International Monetary Fund (IMF), which revised its growth forecasts for the UK up last month - 1.4% in 2013 and 1.9% in 2014. The IMF also said it expects the US to drive global economic growth, although they lowered their 2014 forecast by 0.2% due to fears over debt negotiations. The IMF also warned that global expansion was being hampered by the slowdown in emerging economies like Brazil, China and India.

The IBR data also suggest the resurgence in business optimism and growth prospects could boost jobs. In the UK, net 45% of businesses expect to hire people over the next 12 months, up from 28% in Q2. In the US, the figure has jumped from 33% to 42% over the past quarter.

Ed Nusbaum added: “Any increase in jobs figures is positive. Rising employment prospects feed back into consumer confidence further boosting growth. But the global economic outlook remains finely balanced. Take the UK and the US out of the equation, and business growth prospects look a lot less healthy With growth rates coming off their peaks in the emerging economies, another deadlock in the US is something the global business community can ill-afford."

The Grant Thornton International Business Report (IBR) provides insight into the views and expectations of more than 12,500 businesses per year across 44 economies. This unique survey draws upon 21 years of trend data for most European participants and 10 years for many non-European economies.

Data collection is managed by Grant Thornton's  core research partner -Experian. Questionnaires are translated into local languages with each participating country having the option to ask a small number of country specific questions in addition to the core questionnaire. Fieldwork is undertaken on a quarterly basis. The research is carried out primarily by telephone.

IBR is a survey of both listed and privately held businesses. The data for this release are drawn from interviews with 3,300 chief executive officers, managing directors, chairmen or other senior executives from all industry sectors conducted between August and September 2013.